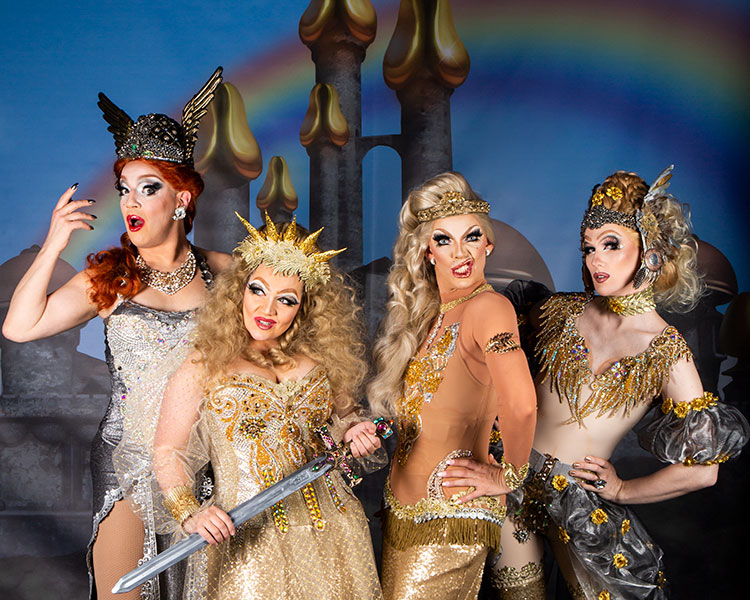 Memoirs of a Valkyrie: A full evening of shenanigans

On October 10, 13 and 19 at Tjarnarbíó, four performers will reenact the epic adventures of Brunhild in Memoirs of a Valkyrie, an extravagant drag show inspired by the tales and exploits of the legendary heroine. Cameron Corbett, also known as Faye Knús on stage, tells us more about the show, its origins and heroic figurehead.

In a nutshell, what is Endurminningar Valkyrju?
“Memoirs of a Valkyrie, or Endurminingar Valkyrju, is a theatrical event – I like the term “extravaganza” – of drag queens celebrating the many different facets of the pan-European icon, Brunhild/Brunehilde/Brynhildur.

“There is dancing, singing, comedy, drama, and even puppets. It’s a full evening of shenanigans.”

There is dancing, singing, comedy, drama, and even puppets. It’s a full evening of shenanigans. It’s pure entertainment and a whole lot of fun. Well, the cast is having a great time, anyway.

It’s performed mostly in English. Did I mention it’s a drag show?”

How did you come to pick the legend of Brunhild as raw material for the show?
“My friend Ásgeir Helgi Magnússon [aka Agatha P., ed.] asked if I wanted to collaborate to create a new production.

I was reading the Niebelungenlied, at the time, and I was right where Siegfried was planning his trip to the wealthy and extravagant Iceland/Issenland. The character Brunhild was right in front of me. A simple check to Wikipedia gifted me with a trove of information. The valkyrie, the queen of Iceland, a Visigoth queen, she has had many identities in the European histories.

Along with fellow performers Sigga Eyrún and Gógó Starr, we used snippets from the varying and conflicting stories to inspire a bunch of short and silly drag acts.”

What did you find in the valkyrie that made you want to give her a makeover?
“We read her tales and exploits in the Niebelungenlied, the Völsunga saga, the libretto of Wagner’s The Ring Cycle, a bunch of Eddas, and some other stuff.

It became clear to us that this miraculous heroine had been reduced to a bit part in the tales of men. Screw that. Brynhildur deserved her own drag show.

I must add that we were researching only for inspiration, not for any sort of academic review. One of our working statements was “free yourself from the burden of intelligence”. So, Memoirs of a Valkyrie runs the gamut from Wagner to Bugs bunny and Elmer Fudd.”

All details on the show can be found here.