Heiðrikur: “Being gay was a bad thing”

Think of a time in your life where you longed for closure. Perhaps you suffered through a difficult breakup or you quit the job that was holding you back. Who knows, maybe you had a traumatic childhood with many obstacles and roadblocks. After going through these life changing experiences, it’s easy to reflect on the past and dwell on the details that once impacted you so intensely. Like solving a puzzle, it’s a process that involves the unravelling of your inner thoughts, fears and emotions.

While there are many ways to find closure from the past, we sometimes lean towards ceremonial practices to find the strength to “let go” and seek new beginnings. As for Faroese artist Heiðrikur (who goes by the artist name Heidrik), he’s found his own closure from the past, metaphorically through the most commonly practiced ritual on the planet: a “Funeral”, which happens to be the title of his latest LP. 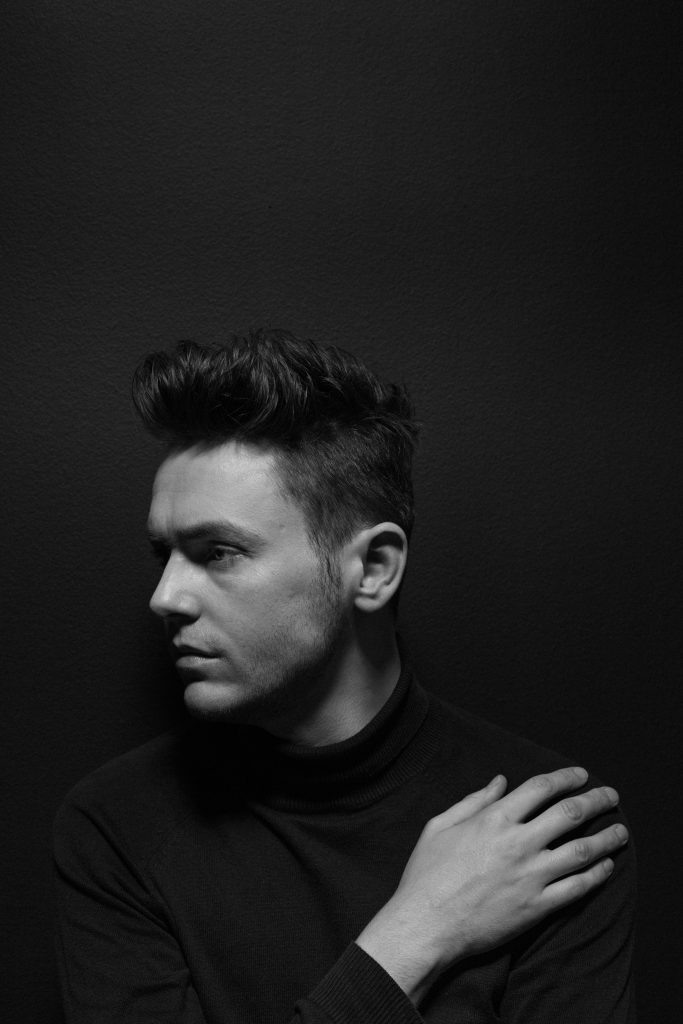 Usually portrayed as a sad or dark event, Heiðrikur sees it differently. For him, the word “funeral is such a beautiful word because it holds so many elements of closure.” And while nobody can put the “FUN” in “funeral”, Heiðrikur’s newest body of work opposes the idea of it being an ending, rather than a new beginning. His multi-disciplinary talents have brought him all over the world, winning awards for his directed films, and now earned him a record deal with a Polish label (Fonobo). Having lived in Reykjavik for the past three years, we wanted to dig deep (at least 6 feet under) and learn more about his creative path, his tour in Poland and the re-release of his brilliant album.

He answers the Skype the call on his way to a cafe with a gentle smile on his face. The sun is shining and you almost feel the summertime air through the iPhone. Upon his arrival, he seats himself in a cozy corner, quietly like a student who’s late for class. “For me, to combine music and videos is sort of the ultimate marriage because you get lyrics, you get music and you get the visual. It’s a brilliant way to tell stories. You’re using all of your human senses and specifically for this album, I wanted to use all my skills,” he tells me.

It’s rare to find artists nowadays who film their own videos, perhaps that’s what sets this Faroese creator apart from the rest. “Not to sound arrogant, but I don’t consider my videos as “music videos” in a commercial sense. I consider them art pieces, as they hold no commercial value. For me, it’s an artistic extension of the song, to pass on the full message. That’s what I love most about the video part.”

Having grown up in the Faroe Islands, one of the smallest countries in the world, Heiðrikur was raised in a conservative environment. He was part of the first generation of Faroese kids to own a TV and grew up feeling different. “I come from a very conservative background back home, where homophobia was thriving and I often felt shame for being myself. It was easy to feel isolated on the islands, as I was surrounded mostly by fishermen and we were only 20,000 people in Tórshavn after all. Religion was also very prominent in my childhood, which is where we were told that being gay was a bad thing. Nobody knew why the church thought homosexuality was a bad thing, it was simply what we learned and that’s probably why I stayed closeted for so long.”

“Religion was also very prominent in my childhood, which is where we were told that being gay was a bad thing. Nobody knew why the church thought homosexuality was a bad thing, it was simply what we learned and that’s probably why I stayed closeted for so long.”

A waiter from the cafe interrupts our conversation, telling Heiðrikur to order something. He laughs about it, orders a latte and continues talking about his upbringing and how it affected the writing of his album. “I had been going through a lot, and I felt that I needed closure to move on from my life. I felt like I was going to explode and I needed to put these songs out. From the start, I had tons of ideas, most of which I wrote down and I even sketched some of them. Finally, one of my good friends from Sweden came to visit and we wrote the entire album in just 10 days.”

I pause for a moment, wondering if I had heard him correctly. “You mean 10 months?” I ask, unable to believe him. “No really, we wrote it in 10 days. The entire album was already in my head along with the concept, so it was easy to write it all down and bring it to life. I knew what I wanted to say. Janus (Rasmussen), my producer and best friend, was great to work with since we had known each other for a very long time, he knew my background and ultimately I trusted him with the vision.”

Heiðrikur’s album “Funeral” has a striking mix of cinematic acoustics with vulnerable and raw vocals, giving his listeners an intimate look inside his mind. “In the beginning, I sent a bunch of raw demos to Janus, me singing with a only piano or guitar. He advised me to release them as is… only tweaking a few things! Although I wasn’t too sure about it, he reassured me that it made it special and for that, I trusted him. 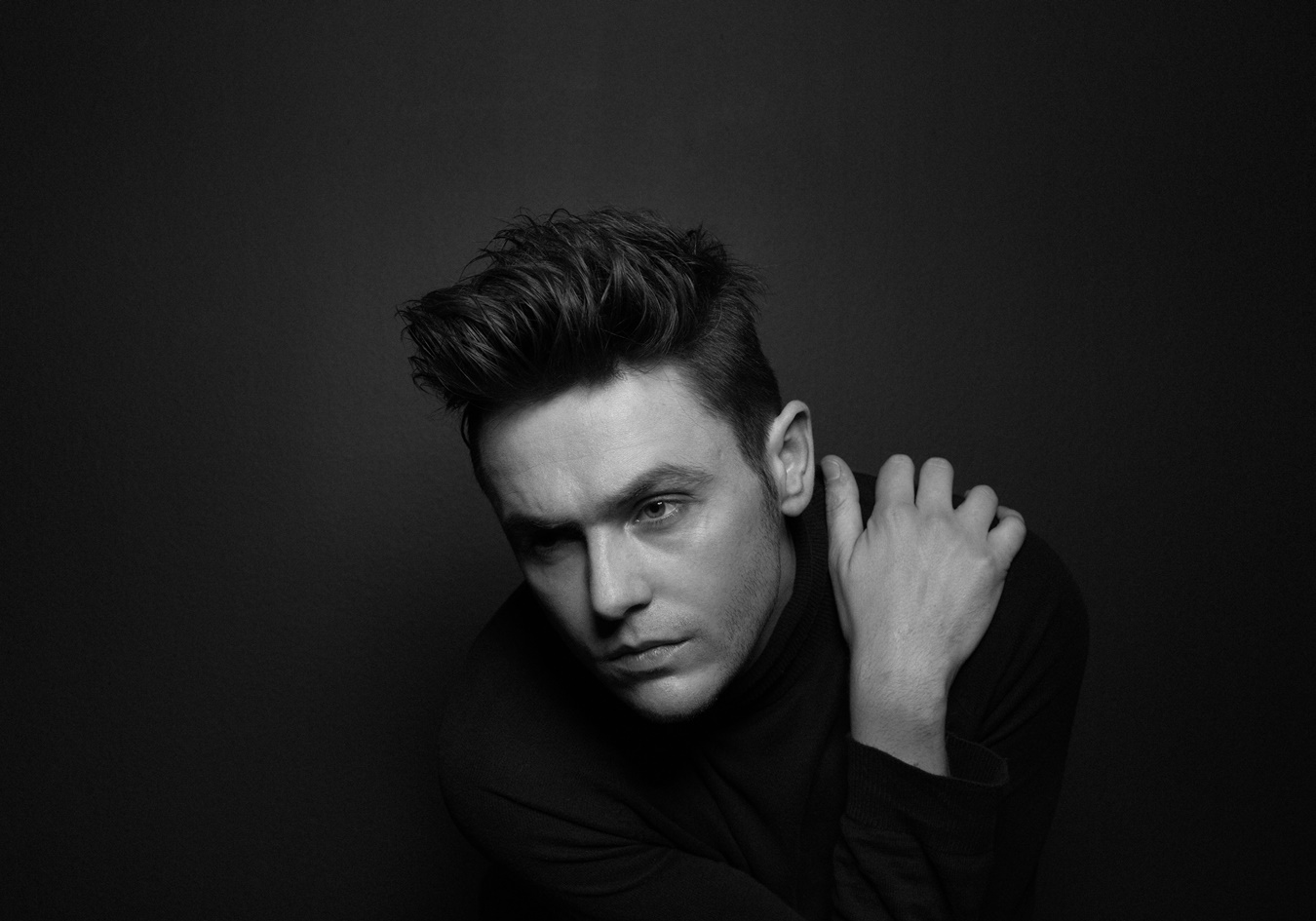 He’s more famous for his electronic music stuff in Iceland but he’s a very talented writer and also amazing with acoustic recordings. This album has no electrical instruments; everything was recorded the same way it would have been done many years ago. With my music, I refer to a lot things that made me happy as a child, such as Hollywood movies from the 50s, Disney movies… old glam Hollywood. My music refers to that era a lot, as that was my way of escaping my own life, watching those movies made in the golden ages of Hollywood. Those were very precious and important times.”

In his latest self-directed video release for the stunning “Boy”, a gorgeous audiovisual that captures a young boy wearing a dress with pearls, Heiðrikur alludes to a funeral, which makes me wonder: what is his fascination with funerals and what was the reason behind the title. “I wrote the song “Boy” about a boy I knew who passed away in high school. He was so beautiful, the kind of beauty that never went unnoticed, but his peers gave him a hard time. He came out as gay and received a lot of hate. After he died, all the people who bullied him were sitting front row at his funeral, feeling their guilt. The shame on the community was remarkable. His funeral was so huge and it was a very memorable moment for me, as it reminded me of how cruel we are as humans. This image stuck in my mind forever.”

He pauses in thought. “In that moment, I came to the realization that “funeral” is such a beautiful word because it holds so many elements of closure, and is linked to a ceremony, where people can have a space to grieve. If you look at all the cultures in the world, each of them have an element of funeral in their society. It’s something about being human, needing a ceremony to fully let go and move on. It’s very beautiful and I see it as a positive thing. It’s not even about the death, but more about the ceremony itself; the flowers, the celebration of life… symbolically, it felt right to compose music from this perspective. Unconsciously, I wrote about things that spoke to funerals: flowers, new graves, ceremonies…” 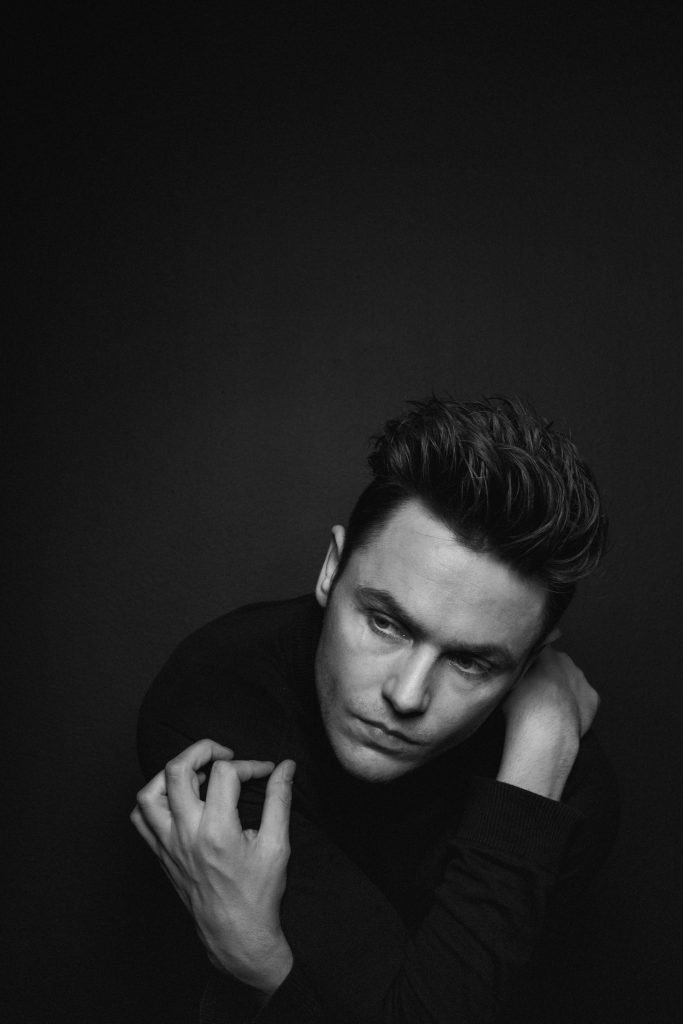 It struck me initially that the death of his friend became a milestone in his life and a fuse to his creativity. While the video for “Boy” challenges the heteronormative masculinity complex, I can’t help but ask: Have the Faroese people made any progress for the LGBTQIA community? “In the last 10 years, things have changed! We have a big gay pride, which hosts thousands of people and it’s such a beautiful change. We were the last of the old Scandinavian countries to legalize gay marriage and for me, it’s exciting to know that it’ll be easier for people to come out and be themselves. In my album, I wanted to encourage young people to be themselves and to know that they are beautiful.”

Having lived in Reykjavik for the past three years, Heiðrikur seems at home in his new city. “The Faroe Islands are very similar to Iceland: we have the same culture, same way of building houses and our languages are similar. Reykjavik feels almost like a bigger version of Tórshavn, maybe more open and current in comparison.”

From his new home, he works remotely with his label team in Poland. In fact, he’s now touring around the country to promote the re-release of “Funeral”, coming later in 2017. “My ex-boyfriend was Polish and upon going there to visit, I met one of his friends who is a famous singer. We really got along and without telling me, he sent my stuff to a label called Fonobo. At the time, I just wanted to put an album out, and I never dreamed of someone actually listening to it. Long story short, they contacted me and offered to sign me.

“I wrote the song “Boy” about a friend of mine who passed away in high school … He came out as gay and received a lot of hate. After he died, all the people that bullied him were sitting front row at his funeral, feeling their guilt.”

So now I’m performing around Poland and we will plan the re-release of “Funeral” for October. It’ll be interesting because the Polish societies are currently operating from a conservative headspace and I think my tour might challenge this mentality and hopefully become a safe space for people like me. I wouldn’t consider my act political, but I think it’s relevant in countries that are more ignorant towards music that pushes a liberal agenda,” he confesses, as he takes a sip of his latte.

It’s clear that Heiðrikur’s journey over the past few years in Iceland has helped him find some closure. He isn’t focused on burying his past. Instead, he’s celebrating the death of his younger self by ceremoniously embracing himself through music, videos and art. “Funeral” is an open-casket: vulnerability, sadness, loss, reflection and resolution. While the “funeral” he speaks about in his album is metaphorical, his positive reframing of the ritual itself challenges our societies apparent resistance towards letting go of tradition. The death of his childhood wasn’t an ending, rather a beginning that shaped the artist he is today. And when I ask him where he sees himself in two years, he replies: “As long as I can do what I love, I’ll be happy.” 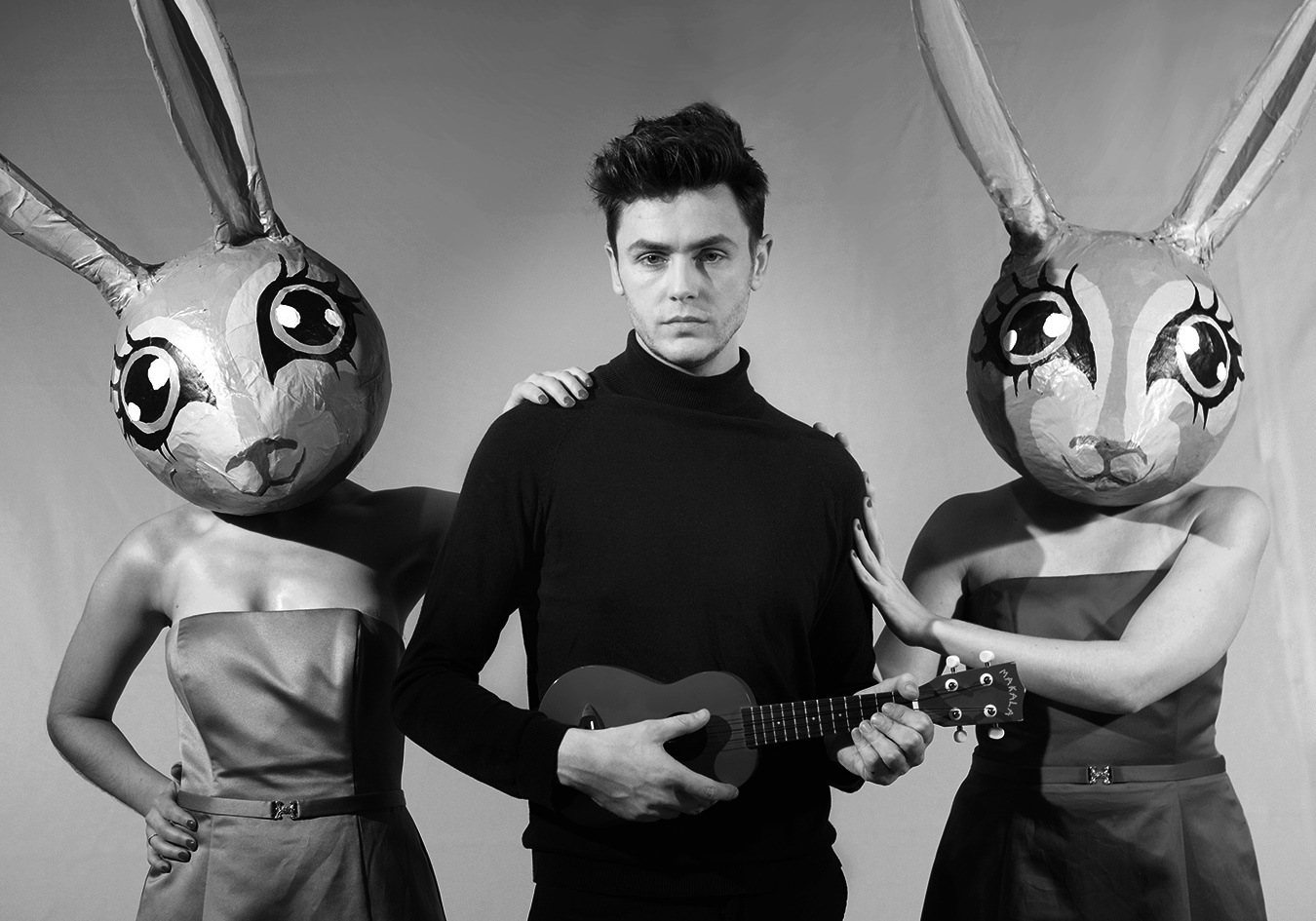