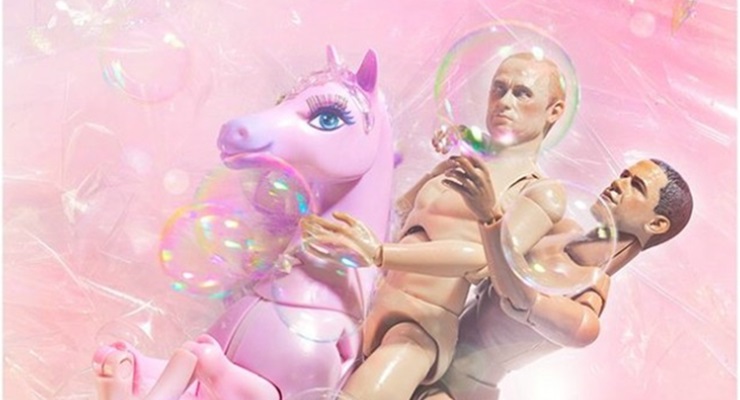 “For me it’s not provocative to show love between two men, but seeing opposing statesmen in love challenges people to understand that love is the answer to everything and that love makes everyone beautiful…even Putin,” says Danish artist Jim Lyngvild, who  literally wants world leaders to make love, not war. Lyngvild has created a new exhibition where both Russia’s President Vladimir Putin and American President Barack Obama are portrayed as gay. A gay couple to be more exact.

The exhibition, titled Icons, features dolls in the likenesses of the Russian and US leaders in a variety of poses; caressing, in bed, having a cup of tea in a garden and riding a pink pony among other activities. “If Putin would just bend over and give it up for Obama, the world would be a greater place to be,” says Lyngvild  of his forthcoming exhibition, which also includes dolls of Kin Il-Sung and Adolf Hitler.

Tha statement should come as no surprise as Lyngvild has long been considered untraditional and provocative when it comes to his various projects and finding inspiration. Labelled designer, photographer, writer and fashion commentator, he is also known for being very outspoken, for example being relieved of his duties as the host of Copenhagen Pride for many years after publicly stating that the only people who whine about getting tattoos are “little faggots” . Lyngvild currently lives in a wooden viking castle on Fyn and once held one of the world most funniest records (untill it was beaten in 2012): gobbling seven Ferrero Rocher chocolates in just one minute.

Icons is set to open at Gallery Flintholm in Odensve (third largest city in Denmark) January next year.

Out and About Denmark reports.