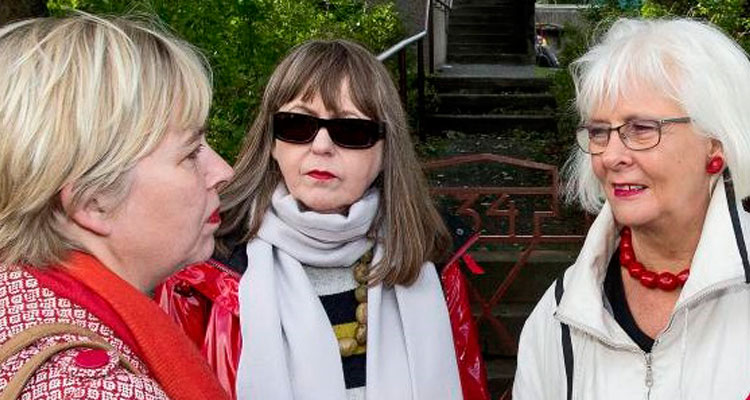 “People from around the world and their leaders are obligated to demand accountability.”

– All Out co-founder Andre Banks.

People gathered outside the Russian Embassy in Iceland yesterday, to protest Russian law cracking down on gays. A law that has caused outrage in the West, especially after pictures and videos showing violence being carried out by a Russian vigilante group against gay youths emerged on the Internet. Yesterday protestors wore the color red as a symbol of love and waved sign that read “Love always wins”.

Amongst those who showed up to protest was Jóhanna Sigurðardóttir, former Prime Minister of Iceland and former leader of The Social Democratic Alliance (i. Samfylking). Jóhanna is married to Jónína Leósdóttir, writer and journalist, and was the first openly lesbian ever to be elected prime minister.

The protest was organized by the National Queer Organization (Samtökin ’78) in accordance with the bid of international gay rights group All Out.

The group called 33 cities in Europe and America to take part in a protest, before St. Petersburg hosts world leaders of the G20 summit which starts tomorrow.

“Putin is breaking the law. The anti-gay laws violate Russia’s own constitution, the European Convention on Human Rights and the International Declaration on Human Rights. People from around the world and their leaders are obligated to demand accountability,” All Out co-founder Andre Banks said in a statement.

Yesterday people protested all over the world, waving rainbow flags and signs and wearing banners with messages such as “Putin hands of Queers” and “Love Russia. Hate Homophobia.” World leaders have already responded. According to All out British Prime Minister Cameron has agreed to raise the anti-gay laws with President Putin and US President Obama will meet with LGBT activists in Russia this week.